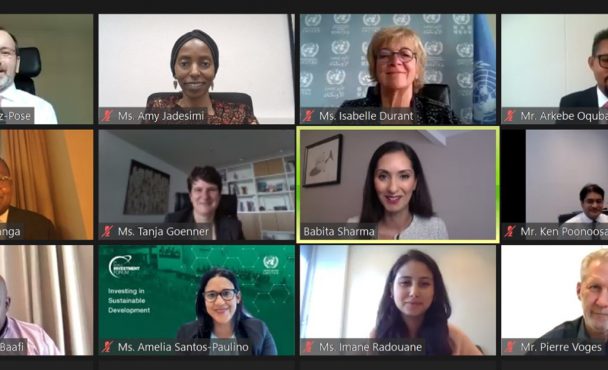 LADOL MD Joins UNCTAD and GIZ to Launch “Handbook on Special Economic Zones in Africa: Towards Economic Diversification across the Continent”

21st October 2021: Dr. Amy Jadesimi, Managing Director of LADOL Free Zone, joined a high-level panel convened by UNCTAD (The United Nations Conference on Trade and Development) and GIZ (Deutsche Gesellschaft fur Internationale Zusammenarbeit GmbH), under the auspices of the World Investment Forum 2020, Investing in Sustainable Development, to launch the long-awaited “Handbook on Special Economic Zones in Africa: Towards Economic Diversification across the Continent”.

Despite Special Economic Zones (SEZs) having been widely used for decades, there is relatively little systematic research on their performance or social, economic, and environmental impact, especially in the context of Africa. UNCTAD’s World Investment Report 2019 presented a comprehensive analysis of the number and types of SEZs. However, large gaps remain concerning data on their design and on the benefits that they accrue to the host economy.

Similarly, although the implementation of the African Continental Free Trade Area (AfCFTA) agreement is set to impact SEZs on the continent significantly, there is a lack of research and policy guidance on how zones can adjust to the new regulatory environment. In this context, UNCTAD, with the support of GIZ, has developed a handbook for SEZs on the continent. The handbook provides best practices and policy recommendations across a wide array of topics relevant to zones and also features case studies from a number of different zones within and outside Africa.

In addition to the dissemination of the handbook’s findings, UNCTAD and GIZ are also arranging a series of technical cooperation workshops in different parts of Africa. The handbook and the related technical cooperation have a particularly strong emphasis on helping SEZs adjust to the new trade and investment environment in Africa, after the full implementation of the AfCFTA.

Speaking at the event, Dr. Jadesimi strongly advocated the role Nigeria will play as the industrial hub for West Africa as well as being an economic engine for the rest of the continent, enabled by its free zone regimen “Nigeria is a natural pan-continental hub. Public and private free zones across the country will be able to drive local manufacturing using a range of models across the country from mono-industrial zones to multi-industrial and financial zones – all of which will create a multiplier effect on job creation.

The launch of this handbook will help trigger an influx of investment into these zones as it provides a set of global standards that investors can use to assess and invest in zones based on the strong market cases we have in Africa. This is another step towards making fit-for-purpose, long-term, low-cost funding available for free zones across the continent.” You can download the full report here: https://unctad.org/webflyer/handbook-specialeconomic-zones-africa

LADOL is building the world’s first Sustainable Industrial Special Economic Zone (SSEZ). LADOL is using the UN’s Sustainable Development Goals (SDGs) to build a unique circular ecosystem, servicing a range of industries. The Zone was developed out of a disused swamp and has been operational since 2006. Every year since then the infrastructure and facilities have grown and expanded.

The Zone now provides a 24/7 efficient, safe, and secure location from which local and international companies, in a range of sectors, can start operating immediately. In 2017 LADOL disrupted the local oil and gas market, halving the costs of local support, and creating thousands of local jobs. LADOL is now focused on attracting and servicing a range of non-oil and gas companies, in sectors ranging from technology to agriculture. The sectors identified will work together to create a circular economy within the Zone. West Africa is one of the largest underserved markets in the world with the fastest-growing population. Industrial companies working in LADOL can service this market sustainably and profitably while creating tens of thousands of jobs. As the local market grows there will be a higher demand for locally produced products, a larger skilled workforce, and cheaper domestic operating costs.

LADOL is becoming a blueprint for the sustainable industrialization of Africa, turning Africa’s demographic dividend into global wealth creation.